Want to know what you can do with a PhD in Physics? You've come to the right place! 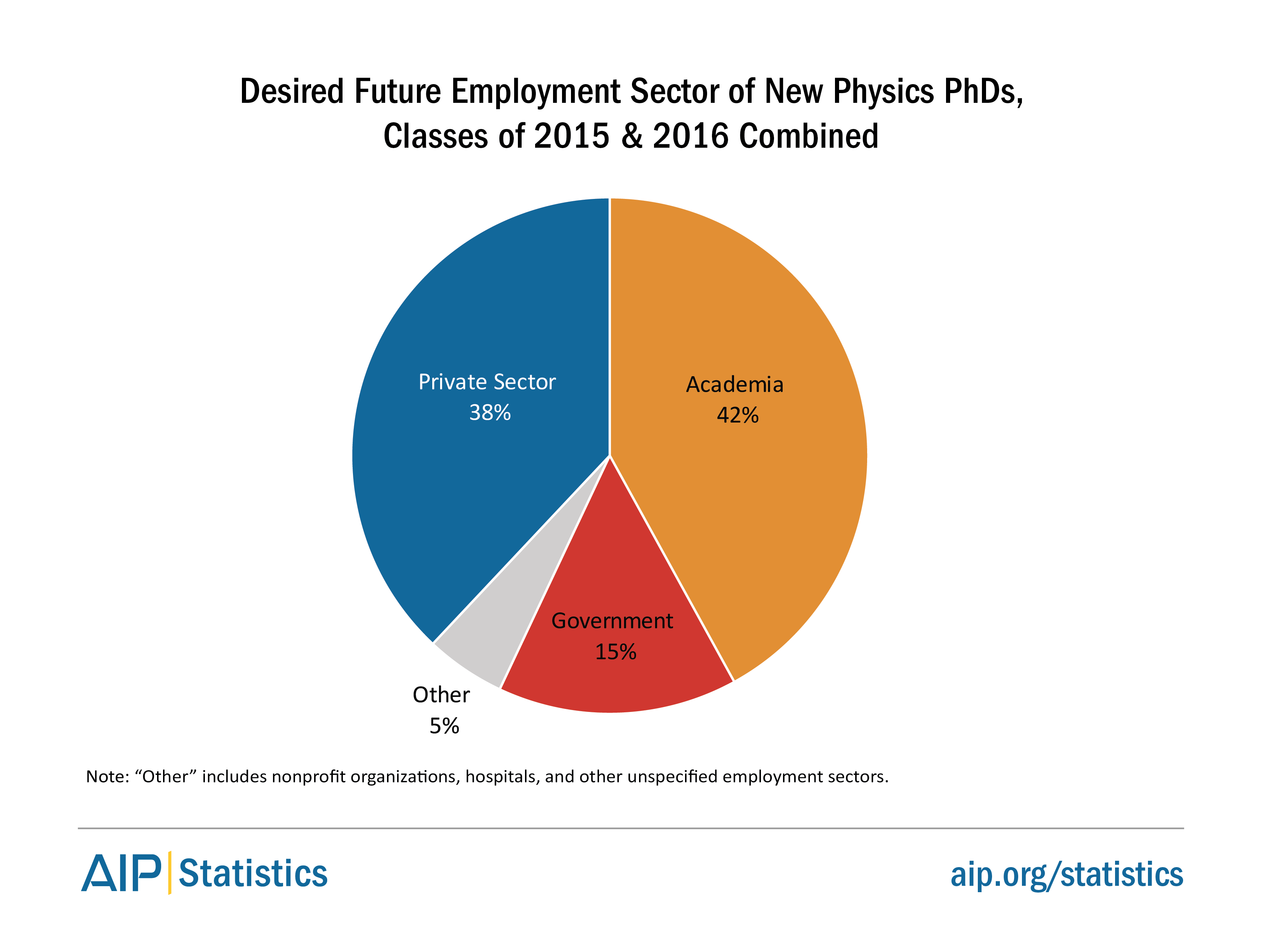 This page provides more information about the different fields of employment physics PhDs work in, their typical starting salaries in those fields, and the skills they gained while studying for their PhD that they use in their current jobs.

In addition to these statistics, you can read more about the kinds of jobs people with physics PhDs do on our page of profiles of physics PhDs.

All the statistics on this page, along with many others, can be found on the AIP Statistics website, under the section for employment for PhD recipients.

What fields do physics PhDs work in? 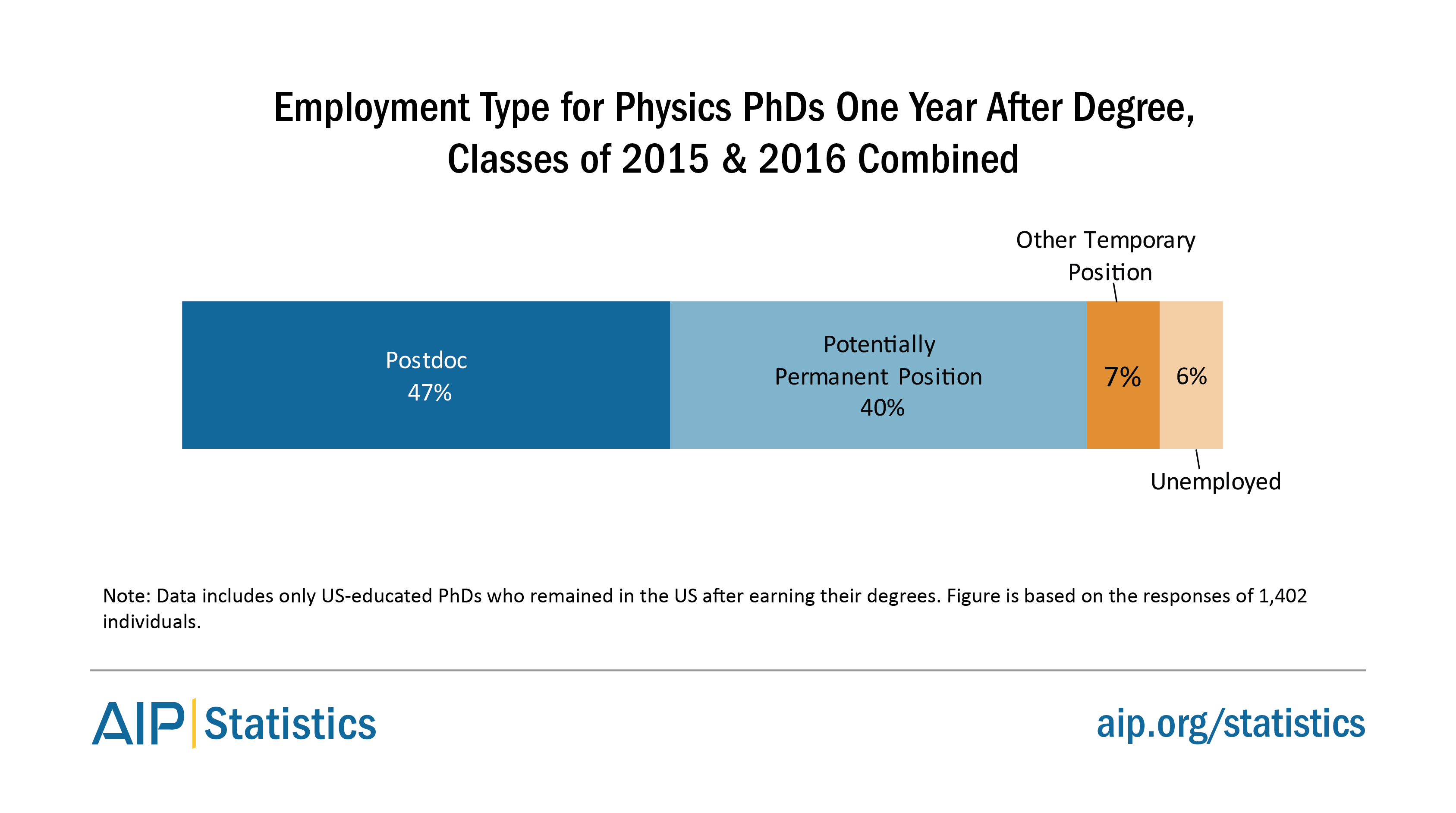 Not all PhDs work in academic fields!

After earning their PhDs, slightly less than half of those granted in 2015 and 2016 were employed in postdoc positions, three-quarters of which were in academic institutions. Most of the rest were in government positions, primarily in national laboratories.

What do PhDs in the private sector do? 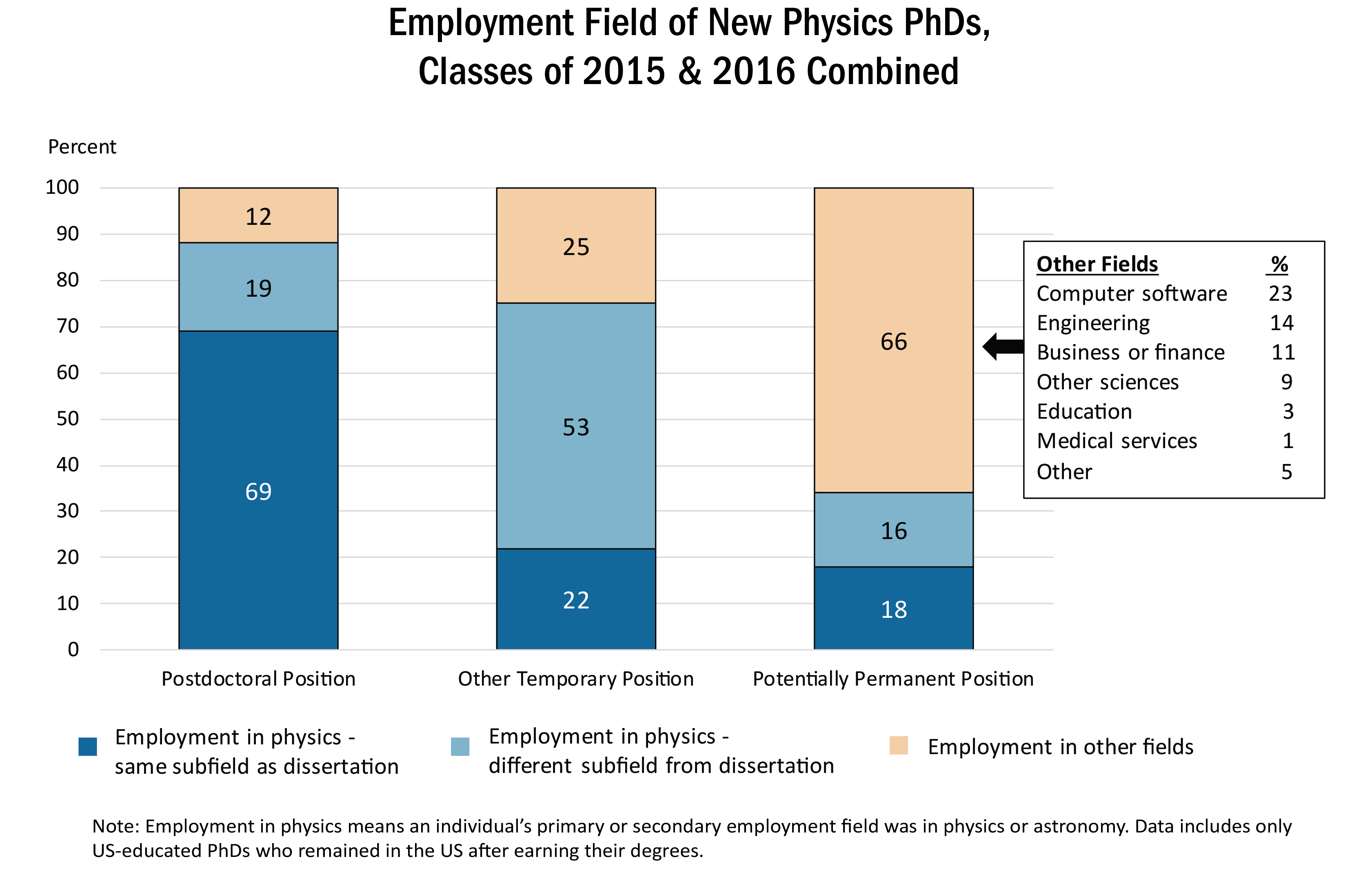 While most postdoc positions are in some subfield of physics, and usually the same subfield they earned their PhD in, two thirds of physics PhDs employed in the private sector are working in fields other than physics.

The most common field is computer science, followed by engineering and business. You can read about lots of these jobs in our physicist profiles of PhD recipients, which include people working at financial companies, data scientists, engineers, educators and entrepreneurs.

How much do physics PhDs earn? 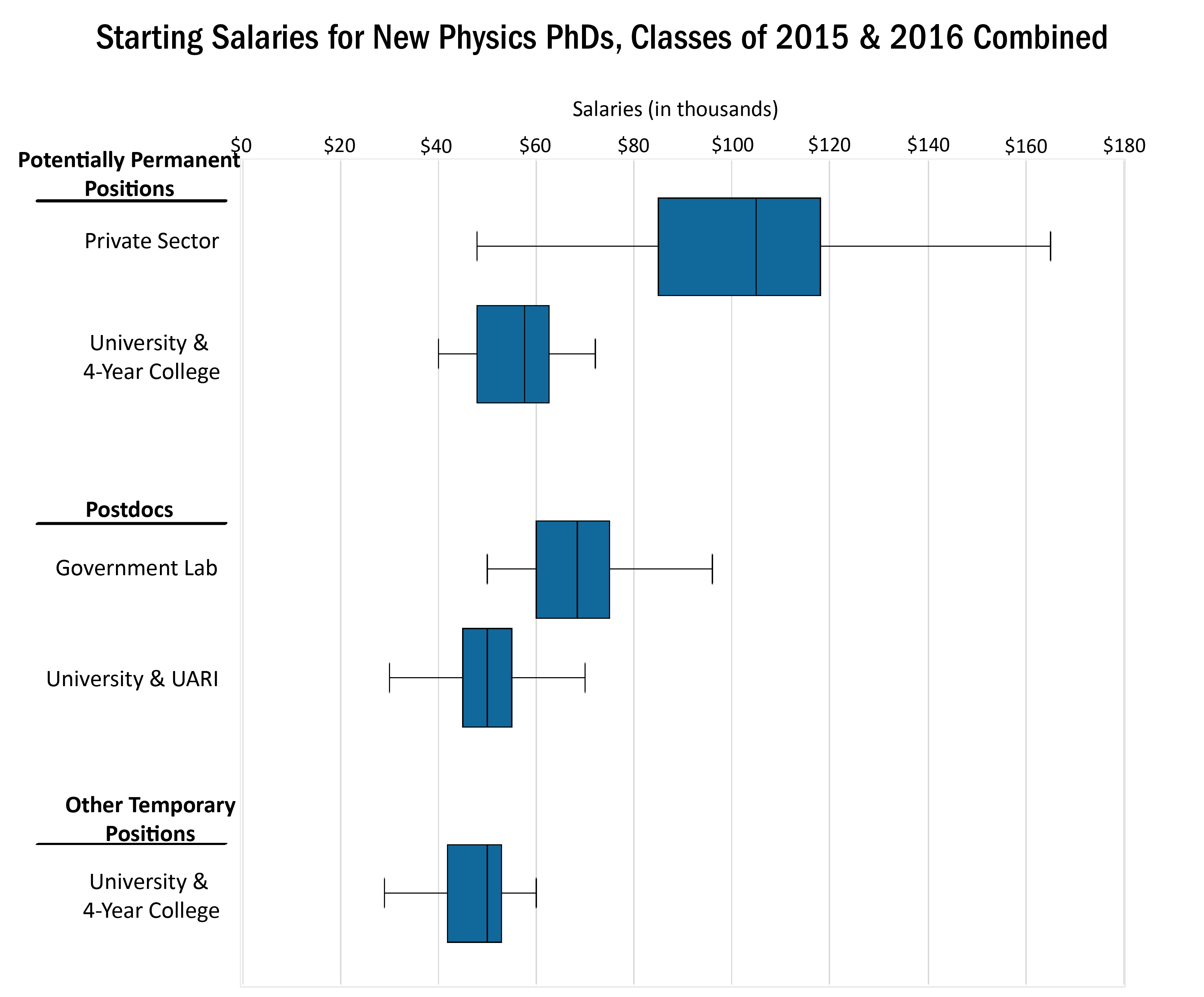 There are many high-paying and interesting private sector careers you can pursue with a physics PhD!

Physics PhDs working in the private sector had the highest median starting salary of $105,00, although they also had the largest range of starting salaries. 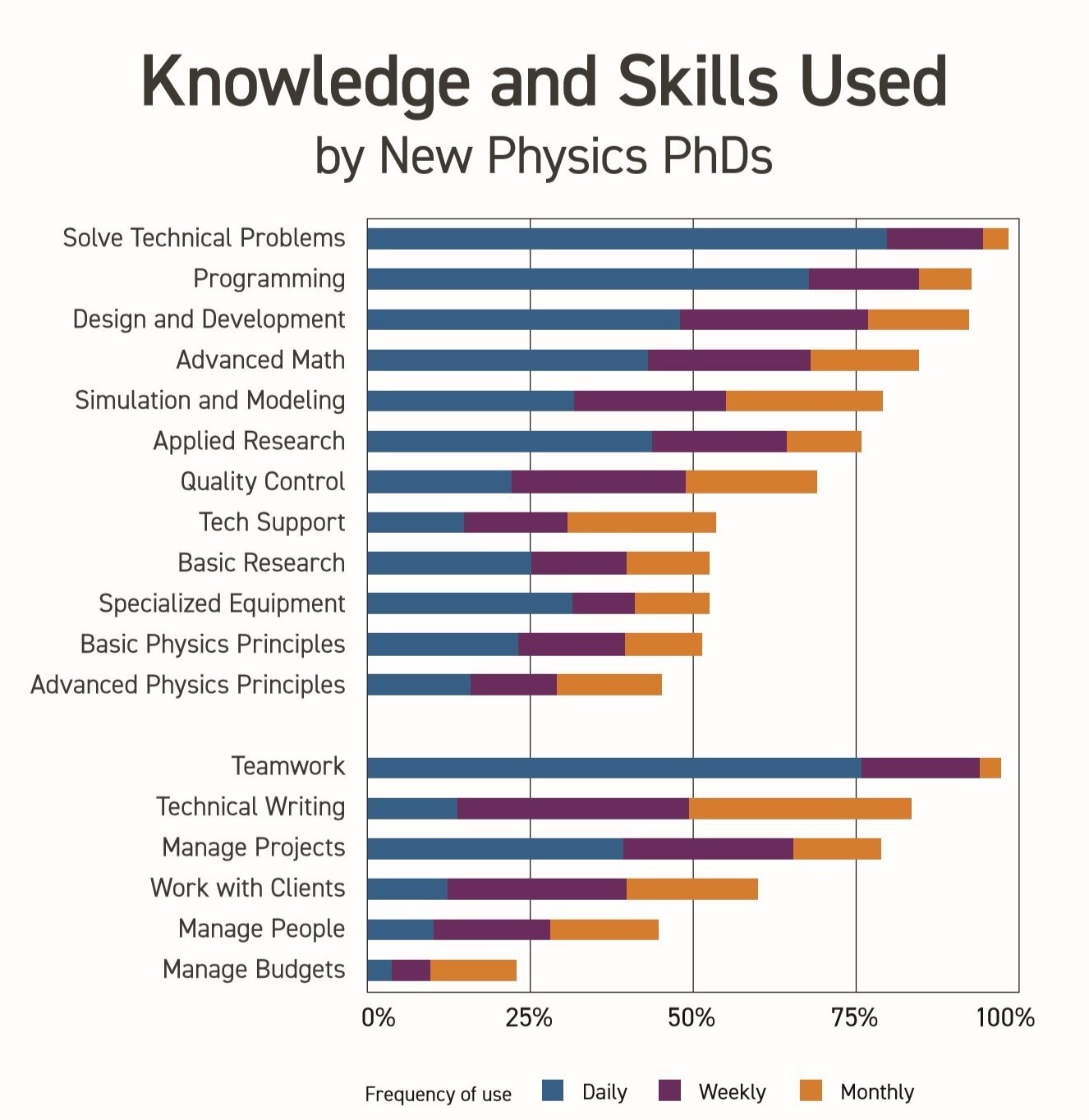 What skills does a physics PhD use at work?

A PhD provides many useful skills, even if you don't want to work in academia!

Other common skills used by PhD recipients in the private sector were programming, design and development, advanced mathematics, applied research and technical writing. A PhD provides a great foundation for all of these skills!